Yes.. terday was interesting.
I'd bought a Luminox watch through Amazon.  The watch I received looked like the one I'd ordered... for the most part, but not quite, so I went on line and checked.  The watch bands were different.  I sent an email to Flying Fashion, the retailer, thinking they would send me a new band.  Their response was to blame Amazon Fulfillment for sending me the wrong watch and tell me to send back the watch, no offer to replace the watch with the correct one, just return it.  Being in retail, I find that reaction suspicious - no one likes to take a hit in revenue.  Surprisingly, I've already received an email from Amazon crediting my account.
And the Idiot Jerk in the White House gave some sort of statement yesterday condemning hate groups... too, too late.  My money says he can't even wipe his ass clean which is why he has this lingering stink of shit around him.  Maybe you ought to reach for your gas mask now since it's only going to get worse.
And last night the "Yestival" was in Hershey. 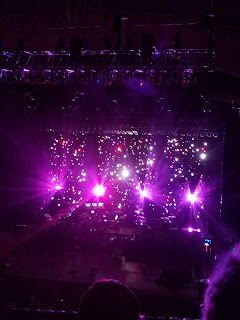 Carl Palmer opened the show... and he was tremendous.  He got a standing ovation when he launched into the ELP version of Fanfare for the Common Man!

And then Yes took the stage.  Steve Howe and Alan White, two of the original root members, Geoff Daniels on keyboards (he's been playing with the band on and off for years), Jon Davison on vocals, and Billy Sherwood on bass.  They had a 2nd drummer last night so I guess White must be looking at retirement. 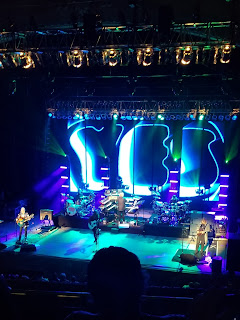 I was very pleased!  This was probably the last time I will see one of my favorite groups and I'm glad it was a damn, a really damn good show!