So, would you hit this?

So, while the Idiot Jerk in the White House was creating more turmoil in Phoenix last evening, I went to the movies to see  "The Hitman's Bodyguard."  I got to see a comedy, action, buddy movie while the Idiot Jerk was reading edited transcripts of his Charlottesville Tweets in order to look less racist, and, of course this was to an audience that was mostly white.
The movie was really funny, unlike the asshole in Phoenix.  It is a buddy movie, and for buddy movies to work the two stars need to have chemistry... and Ryan Reynolds and Samuel L. Jackson do have chemistry... and it is good, very, very good.  The action scenes?  They're okay, sometimes a bit long.  There's one in Amsterdam involving a speed boat, a motorcycle, Interpol Agents in cars, Evil Russians in cars, and it goes on a bit too long.  But the scenes between Reynolds and Jackson?  These two characters fit each other like puzzle pieces.  They are The Odd Couple with guns, and vulgarities, with humor that sometimes catches you by surprise as it slips into slapstick (getting off the roof of the Interpol safe house, for one).  Strange though it sounds, their verbal of abuse of each other gives this movie it's heart, and it's not a bad one. 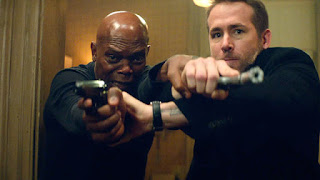 As for Phoenix?  The Idiot Jerk spewed out more lies, outlined his racist beliefs towards Latinos, said that he would build his wall even if he had to shut down the government...  Someone should tell this walking, talking turd that one of the main goals of a president is to grow his base, not continually isolated from the rest of the country, which is what he seems to get his most pleasure from doing.  Rather, his main goal seems to be more about creating as much hoopla around himself, which is why he is the Idiot Jerk in the White House.