Blinded by the Light

So here it is, Sunday.  I work today, off tomorrow though when I pick up my new lenses from Lenscrafters.   While I'm there I'm going to zip over to Boscov's and buy some new curtains (drapes) for the living room.  There was a time when I actually ordered drapes, not any more, it's grab and go for me, a lot cheaper.
I got home from work yesterday and found a letter from the Social Security Administration in my mailbox - they're asking me how much money I'm going to be making in 2017 and 2018.  Well, 2017 is easy to figure out, but I have an increase coming up in my paycheck which will change 2018... and they need to know before the increase takes effect, so it's guessing time again.  They also want to know when I retired... well, they should have that information, I don't know why they're asking me.  Perhaps it's because I took early retirement because of my back... but then, of course, I didn't actually stop working.
I guess the Idiot Jerks buddy Stevie Bannon gave another interview to what he would call the "fake media" once again criticizing the Idiot's administration.  My money says ol' Stevie baby is mad as hell because he's lost his position of authority.  This is how it goes with Scumbags, sooner or later they're going to get flushed down the toilet, or down the sewer drain.  Nothing's going to change.
And we sold out of welding safety glasses yesterday.  You know, those glasses arc welders use to keep from being blinded by the light? 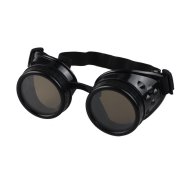 Eclipse, you know?  Everybody wants to watch the moon pass in front of the sun!  Of course, only certain welding safety glasses will protect you eyes; the ones that are Shade 12 will do the trick.  Personally, I think a lot of people are going to end up saying "that's it?"  I mean, it's not like rainbows are going to erupt through out the corona?  In fact, you won't see any colors at all, just pretty much you standard, old black and white.  Still, it wouldn't surprise me if you end up having a bunch of drunks out there, cupping their hands around their eyes, whining "I can't see anything," as they burn off their retinas.
Posted by Dave R at 9:40 AM