So, I went to see "Atomic Blonde" last night.  It was entertaining, violent, and good for the most part - the only issue I had was that as soon as the bit about the 'double agent' came up... well, I knew pretty much how it was going to end.  This means that if you're one of those people who is good at stacking blocks together to form a bridge to the truth... well, you may also know how things are going to end.  Of course, there can be a lot of fun in watching how those blocks get stacked.  I enjoyed being about to pick out what was a clue and what wasn't, the old 'red herring' as they used to say.
Can you believe we've gone... is it a day without a Tweet from the Idiot Jerk in the White House?  Don't worry, those old, decrepit fingers of his are ready and waiting for the first thing that's pisses him off.
I saw where the Republican chairman of the Judiciary committee is trying to prioritize the Clinton emails so long after the election.  It's all about beating a dead horse, you know?  Like Benghazi.  Sadly, this is the only way they can keep their base involved as the Idiot Jerk's administration continues to devolve.  For the majority, however, the truth is that the Idiot Jerk has an approval rating of about 39% (if you score it on a curve) and when the minority bring up dead, smelly horses in order to rally their base the national response is to shout either "go away" or "shut up!"  Their tunnel vision is so narrow they totally fail to perceive that they have no traction, their tires are spinning relentlessly.  In fact, I find it positively hilarious that Jeff Flake, a Republican from Arizona, has been rather forthright in stating that his party is in total denial about the Idiot Jerk.  Oh, and the bit about "spasms of dying" adds a nice touch.
James McAvoy costars in "Atomic Blonde," and is somewhat cute with scruff.  Most of his scenes with Charlize Theron are cut with close-ups, however when their share the camera it is fairly obvious that he's a bit on the petite side. 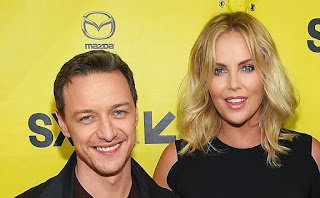 Now, I have nothing against someone being petite, in fact, sometimes that can be quite advantageous.  In movies, however, I do like the illusion that the Leading Man does have a bit of size, if you know what I mean.
Posted by Dave R at 9:35 AM