Well... I decided to take a personal day today rather than go into work, which gives me 10 days in a row off - in 4 weeks my tenure will pop another 3 weeks vacation into my box.  If I stay full time for another 6 years I'll get 4 weeks of vacation...  I don't think that's going to happen, the full time bit, you know?  Part-time?  Sure.  Of course, I did get a cool reception when I called in but... well I have time on the books because I don't take personal days that often.
Anyway, as most of you probably saw, the Idiot Jerk in the White House let loose with a Twitter tirade yesterday, his 200th day in the Oval Office, mostly because his base is beginning to crumble.  Ain't this fun!  Brookings has a nice bit about it and includes a link to the Quinnipiac Poll.  Here are some more really, really bad numbers for our non-president.  Let's be honest here, many of us are beginning to enjoy rubbing his nose in his own shit.  There's even a rosy little bit on how 52% of Americans would now prefer to have a Democratically controlled House.  The Crazy Right cannot hold their position, they are beginning to fall apart.  This is what happens when a minority hate group manages to get themselves into a position of power.  Understanding the majority, being able to include the majority, reconciling themselves to the fact that they need to compromise and deal with the majority?  These have long been problems with the Republican Party.   They are not the voice of authority for the majority, and so they fail.
And all of those Tweets yesterday AM?   They show that the new Chief of Staff, John Kelly, is unable to control the Idiot Jerk in the White House.
Since today is now going to be the first day of my vacation, rather than tomorrow, I've already started rearranging my schedule.  Leisure time is important, but there are still things that need to be done.  Hey, and you never know, I might be able to find 7 naked men and all of us could form a pyramid. 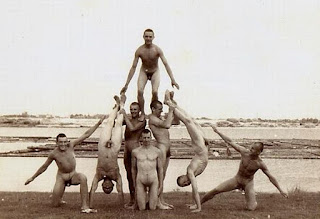