Good Morning.  While it is still cold outside, the temps are predicted to start climbing.  By Tuesday, we're supposed to be in the upper 50s (F).  That's right, we will be closing in on 60.  I don't mind those temps.  I'm saving money on my natural gas bill.  According to UGI, I used 47% less gas last month then I did in 2022.  I'm fine with that.

The charges from my new electric supplier Clear Sky Energy, will begin on Wednesday.  We shall see how that goes.  One of the reasons I chose that company is that there is no cancellation fee.  If it turns out to not be the deal it's supposed to be, I'll just cancel.

They were working on the house next door most of yesterday, putting in the new windows and door.  I haven't seen the quality of the product they're installing, so I don't know how good it is.  I did see the flooring they purchased and it's mid-range.  It will look good on the floor, but durability has nothing to do with how appearance.  A lot of house flippers do this, put in a lesser value product knowing that brand new it will show well.

I made chicken marsala for dinner last night.  And pasta.  I made enough to take to work today for lunch. 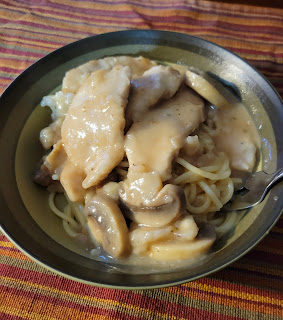 The balloon is down.   The Chinese are upset because they were caught doing something stupid.  The media, conservative, liberal, and everything outlet in between, set this blaze afire.  Rest assured, however, that no matter which way this story drifted, the conservatives were going to fan the flames, anything less would be totally unexpected.
Marjorie Taylor Greene made grew some small headlines when she complained about her salary.  That measly $174,000 is wrecking havoc with her finances.  The old HR rep in me says if you don't like the job, or what it pays, then get another job.  I'm sure she realizes she could probably make a lot more money as a lobbyist, and we all know she's not in Congress to serve her constituents.

While temps north of us are sub-zero cold, we here in Central PA are relatively warm at, what they must think to be balmy, 13 (F).  Last night was the coldest we're going to get in this vortex, I least I think this is a polar vortex, if not, it's something similar.  Our high today is expected to be in the low 30s (F).  Tomorrow, the forecast is for us to reach back into the mid 40s (F).

New windows are being installed in the house next door.  When I had Andersen replace some of mine, they came to the house and measured.  This is not happening in my neighbor's house.  They shopped at Home Depot and bought windows 'off the rack,' so to speak.  This means they need to cut and reframe every window, which leaves gaps in the siding.  Since the existing siding is yellow aluminum, I suspect that will be the next thing they're going to replace.

I watched Indian Jones and the Temple of Doom last night.  The last time I saw it was in the theater in 1984.  I was only mildly impressed back then, and was even less impressed last evening.  The Indiana Jones character holds up fairly well, but the rest of the movie does a deep dive into some cheesy special effects, bad dialogue, and a third act finale that's uninspiring.  Set as a prequel to Raiders of the Lost Ark, had this been the first in the series I have no doubt it would have failed.

And, of course, there is the Chinese weather balloon.  I find the entire situation amusing.  It's almost as if the Chinese put on their thinking caps to decide what it was they could do to screw things up.  Oh, and evidently there's another one cruising above Central America.  And the Republicans in the House are so damn stupid.  The first thing on their agenda is to shoot it down.  Number two on their list is to hold investigative hearings.  They don't see a balloon.  Nope, as far as they're concerned, this is another dead horse they can kick to the gutter.  I thought Adam Kinzinger made a good point when he said that shooting it down would let the Chinese know about our high altitude weapons systems.  We all know that level of intelligence is far above that of your average Republican congressman.
Jimmy Jordan's committee issued it's first subpoenas yesterday.  They actually believe someone in the administration is going to pay attention to them.
Finally, for those who haven't been paying attention, the Orange Anus has been shrieking about how he could end the war in the Ukraine in 24 hours.  While a lot of this is his blustery buffoonery, I wouldn't be surprised this is also a desperate attempt to help his Blow Bro Vlad since things aren't going to well for him and his 3 day war.  Superior weapons systems are arriving in the Ukraine which have the capability of taking out Russian soldiers far behind the front line.  This is not good, especially when conservative casually counts put the Russian dead at around 200,000.  Trump's Blow Bro Vlad is sending his army into a meat grinder.