Well, today's my 8th day in a row.  Tomorrow I have off.  I was supposed to have breakfast with my brother and sister tomorrow but she cancelled.  I called her this AM and she said, "today's my 6th day at work and I need to sleep in," so I reminded her about my schedule and tagged on "oh, and I just got back from the gym."  I have never really understood the 'sleeping in' bit.  I wake up and then I get up.  I read news, do chores, type this blog, and almost always do some form of exercise, either cardio of strength training.
I see the Idiot Jerk was in Texas yesterday, skirting the disaster that is known as Houston, looking over the damage in Corpus Christi and Austin instead.  He's also merchandising the white cap he was wearing.  $40 bucks a pop.  This Idiot will try and merchandise anything.  In fact, I'm surprised he hasn't tried to sell bottles of that spray tan he paint's himself with, of course than his loyal fans would stick out in a crowd.  Of course then they'd cry discrimination because of the color of their skin.
I see Joel Osteen has opened up the doors of his church... finally... and more than a little late.  He is, for all intents and purposes, "a day late and a dollar short."  And evidently he's arguing that the doors had never been closed, but only because he's now in the running for "loser of the year."
And Anne Marie was surmising that I had chicken legs and so I tried to take picture... only problem was that it made my thighs look like rolling thunder.  So, instead I took a picture of the ceiling in my training room. 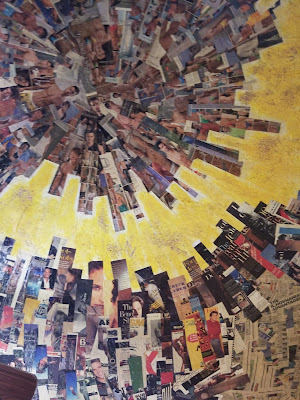 That's right, I decoupaged it.  The round starburst thing consists of pictures from 3 International Male catalogs.  Nifty, huh.  This is what I see when I do my crunches.
Posted by Dave R at 8:56 AM