So, today starts my weekend... wonderful.  In case you didn't know, we're supposed to have an eclipse of the Sun today, not total where I live, just about 75%, and weather wise we're supposed to have thunderstorms this afternoon.  This means we might have a thunder and lightning eclipse.  Yippee.
This evening the Idiot Jerk in the White House is going to spit turds at America.  Rumor has it that he's going to announce that he's sending more troops to Afghanistan... which means he's listening to the same clowns 'W' listened to, you know?  The one's who said the war in Iraq would be over in a couple of weeks?  Of course, these kids are only going to be going there for a brief bit, to help train the Afghanistan army... wait a minute, haven't we heard that before?  Isn't that what the Republicans said about Vietnam?  Dumb Shits.
And, of course, that stain of a human, Jerry Fallwell Jr took a dump in his pants this past week as the attempted to support the Idiot Jerk in the White House.  His stands, however, don't seem to be sitting well with the current student body, and a number of graduates, who seem to have realized that the Idiot Jerk has no values, Christian or other wise.   However, Jerry Jr is going to stick to his guns.  I didn't get a chance, but I wonder just how diverse Liberty U really is, I mean, are there any Latino students, and Black students, or is everyone there a white Evangelical?  I'm sure they have a few tokens floating around, but my money says there aren't that many.  Junior's statements, however, do tend to reinforce the belief by many White Evangelical Christians aren't really that different than the Alt-Right.
Those Baleaf shorts I got turn out to be really great... there's just one hitch, you're supposed to let them drip dry and I threw them in the dryer on delicate... and they've gotten a bit tighter, which means you can see things a lot clearer now.  Lesson learned. 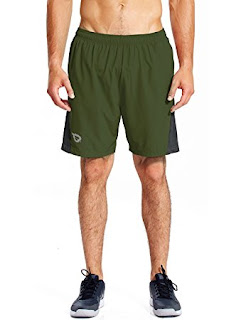 Of course, as I've told people time and time again, there's nothing wrong with tooting you own horn.
Posted by Dave R at 8:52 AM