How is this for Stupid?

So, it's Friday.  A lot of people post all kinds of stuff on Facebook to celebrate the end of their work week...  but not for me, mine does end until next Wednesday.  This... is the hell of working in retail.  At least I'm no longer in management and now have a fixed shift.  One of these days I might even get a fixed schedule... now, wouldn't that be nice.
I see Harvey is supposed to hit Texas sometime today.  I have no idea why a 6' 3" pooka rabbit would want to attack Texas, perhaps because he's a Liberal Bunny?  Or maybe it's just a little Karma heading towards those 'crazy in the head' Long Horns.  I did see that it's been 15 years since the last hurricane hit Texas.  That would have been when 'W' was in the White House.  Maybe there's some connection between Republican Presidents and hurricanes hitting that crazy state.
After my cardio this AM I whipped up some egg bites; egg white, garlic, hot pepper with a tad of cheddar for a tasty, protein snack. 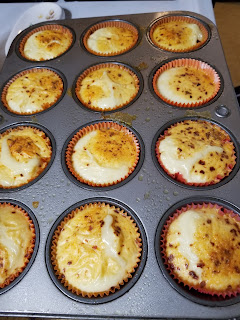 I figure they have about 40 calories each, which is equivalent to going up and down the stairs 2 or 3 times, not that I worry that much about calories (holy shit, I can't believe I just wrote that!).
And I did read something funny about the Idiot Jerk this AM:  Why does he have to threaten a government shut-down if Mexico is going to pay for the wall?  Just think about that?  In the beginning it was those "very, very bad hombres" who were going to pay for the wall, and then, after the Idiot Jerk managed to get himself elected it was "well, we might have to pay for it, but those very, very bad hombres," were going to reimburse us, and then we got to read the transcript of his call the with Mexican President, in which the Idiot Jerk whined.  Now, you don't hear about those "very, very bad hombres."  He wants your tax dollars to pay for a crappy wall that only he and his fan bases believe we need.  How's that for stupid?