Sweating out the Idiot Jerk

So, I guess social media went crazy yesterday when an Idiot spokesperson announced that the "mooch" was gone.  I'd seen the news while I was eating lunch.  What was really funny was that 15 minutes later I was selling a measure to a guy named Kona who pulled his phone from his pocket, looked at it, and announced to me that "the mooch is gone," he then proceeded to laugh, adding "we have the biggest jerk we could possible have in the White House."  Jerk is a good word, a nice noun that precisely describes the Idiot.  Maybe I should start calling him the Idiot Jerk.  Has a nice ring to it, doesn't it?
While I was at PF this AM, some middle-aged gent came in wearing sweat pants and a sweat shirt and proceeded to start strength training.  Now during the winter I wear a lot of sweat pants and shirts when I'm around the house.  If I wear them to the gym, they come off and get stowed in a locker.  I don't wear them to work out since they do make you sweat.  Sweating is good; I do a lot of it in my shorts and T's.  Some people like to sweat a lot and then weigh themselves.  That weight is almost as phony as the Idiot Jerk in the White House, but not quite.  That weight is the result of water loss, which you gain back the minute you start sipping down your trusty Gatorade.  So, I guess this is my workout tip for the day:  loose clothing, shorts and T's are great, sweats aren't.  And don't even get me started on yoga pants.
And I've started playing Tom Clancy's Ghost Recon - Wildlands, in which I get to hunt drug dealers in Bolivia, and, as usual, I made sure that I look like a stud. 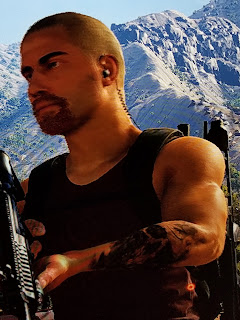