For those of you living in a cave deep, deep underground, the Idiot Jerk in the White House turned his ass towards reporters yesterday and farted out great chunks of fecal matter (that's my way of saying that the shit has started to hit the fan).  And did you hear the wail of Republican politicians as they saw their political futures flash in front of their eyes?  Or was it drowned out by the scrambling of their shitty, little feet as they ran to the nearest camera to denounce the Idiot Jerk?  I've been telling people for a long time now that this moron's Karma is so bad, it's going to sweep over him and all those who supported him washing them all back into the sewer.
He's an old, white guy who sincerely believes that white people are superior.  There is no way in hell he will ever understand anything even remotely close to reality, that we are all one species, that we are human and that we are all equal.  These racist views of his will effect everything he attempts to do; Asians, Latinos, Africans, Australians, Germans, Italians... all will be treated as inferiors.  I mean, would expect anything else from an asshole? 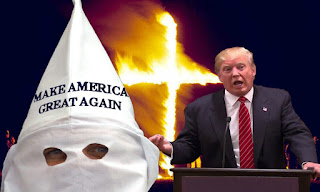 And remember 3 weeks ago when those Crazy Christians gathered in the Oval Office to lay their hands on him?  What does this say about them?  Not much?  Well, it does say that they will spread their legs for anybody who promises to give them what they want.
And what about Luther Strange, that white racist from Alabama?  He says the Idiot Jerk is a miracle from God...  This guy was evidently born stupid.  He deserves to be swept away by Karma.
And they are all tainted flesh, you know, every single Repugnant Republican who voted for him, racist to the core of the party.  They deserve everything that's coming their way.