So, I've been enjoying my time off, my vacation away from my job.  Today, however, seems to be the first day that I've planned to do any of the chores I'd meant to start last week which is fine.  There is a price to pay, however.  This AM I jumped on the scales (that right, I have 2) to check out the damage... if you heard anything around 0517 it was me smashing atoms!  I expected the poundage increase.  I mean, what's a vacation if you don't gain a couple of pounds?  Going to the gym and cardio will be the price I have to pay... and I've already started.
Yesterday I visited my friend Betsy, down in York, and we did what she likes to do - go to the mall.   The Galleria Mall, to be precise.  I hate malls.  You're forced to walk past store after store after store, now of which have any interest to you to your 1 or 2 destination points.  The Galleria has a Boscov's, which used to be really big in Central PA.  It has mirrors on the ceilings.  That's right, mirrors.  Now, how many ways can you spell tacky? 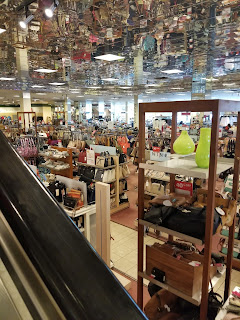 And, of course, yesterday was that shit storm called Charlottesville, but then we all knew there was going to be  shit storm.  The White Supremacists are empowered by the Idiot Jerk in the White House who did what any one person with half a brain expected him to do, protect his fellow racists by blaming many sides, many faces.  And David Duke former grand dick of the KKK called him on it!  "It was our votes that got you elected!" he Tweeted, or something to that effect.  Duke is pissed because he was expecting support from his fellow racist and all he got was some banal statement about hatred.  The statement which intended to spread the blame to those who were injured, who were using non-violence, totally failed to appease.  His base is furious because he failed to support racism, and hatred, and bigotry.  For everybody else, every second of every passing day, it becomes more and more obvious that calling him an Idiot Jerk is much too nice.  Cretin is much better.  In fact, the moment when he revealed his Cretinism is going to have a profound effect on his approval ratings.  You know where they're going to go?  Down even farther.  And now those Supremacists who thought he was king are going to take a big step back, for them he has joined the ranks of the gutless.