Wattle I Do With This

Sometime between the ages of 50 and 55 human skin begins to lose it's resiliency (it loses its stretchiness) which means if you start toning, or losing weight, it doesn't necessarily snap back to the way it looked when you were... oh, say 19.  Yesterday, while I was shaving, I notice a little fold of skin about an inch below my Adam's Apple.  I froze, staring at it, realizing I was looking at a prepubescent wattle - that's right, it's just starting... spread.  Shit.  They're prevalent on my father's side of the family.  My Grandmother had a whopper.  Not wanting that, I will most likely have it removed since I don't want to look like a chicken.
Anyway, as I was thinking about writing this, I thought I'd grab a pic or two of chicken wattles to show what I was talking about and got smacked right in the my forehead with reality.  This is what I'm talking about. 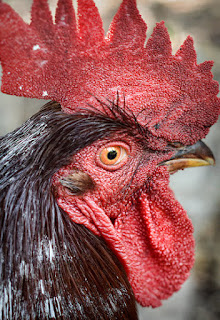 Chickens are the descendants of dinosaurs!  If this is what happened to Raptors, what will happen to us, to our own species?  Currently geneticists are saying our skin will be darker and our cheekbones will be higher which is really, really bad news for Social Conservatives, especially White Evangelicals who refuse to believe in evolution because it makes them wrong.  Still, it's happening.  And there is no way to stop it.  In America alone the population is much browner than it was 25 years ago.  Dominant genes, you know?  And sure, Conservatives can try and surgically remove the color ratio, but they will fail.  There is no stopping that omnipotent power called the Universe.
So, 7 or 8 years from now, when my wattle is much more pronounced, will I have it removed?  Probably. but then I understand that's only a superficial change and nothing more because I know that damn thing will grow back, it is part of what makes me who I am whether I like it or not.
Posted by Dave R at 8:42 AM