The Baby in all of us

I feel really sorry for those people down in and around Houston, which has always been one of Texas' most liberal cities.  The rain is horrendous, and unfortunately the flooding is only the beginning of their nightmare.  The region is temperate, it has a warm climate, and when you have condo walls, and town-home walls, and single residence homes walls filled with water, and it's dark, you're going to get mold.  It will grow everywhere:  in closets, in drawers, in furniture.  Many will simply not return to their homes.  They are losing everything.
So, as I've talked about before, I go to the gym... a lot.  I also do a lot of cardio.  Exercise is healthy.  However, that is not enough because I'm getting older by the day, but then aren't we all.  One of the things I'm concerned about is my muscle mass - we members of the 'aging adult's club' lose it pretty damn fast.  Use it or lose it is true, but sometimes you need to do more than just use it, you just might need to supplement it with... protein.  As we age we tend to need to consume more protein if we want to keep our muscles where they're at.   If we want to gain muscle... well, we need to eat even more protein.  Mike Matthews has an interesting take on the process.  He has some really good articles, especially in regard to protein absorption.  I've taken his advice in regards to my protein intake because, to be perfectly honest, when I get to 95 years old, I don't want to look like a big, old baby.
You do know that if you live long enough, there's a big baby in all of us.
Of course that doesn't mean we need to act like one... and you know who I'm talking about, that whining sack of shit in the White House.  Let's be honest here, the Idiot Jerk gives babies a bad name. 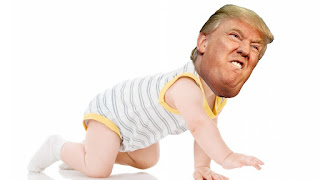 I understand they want him to fly down to Texas, you know, to put in an appearance, as if he really cares.  We know he doesn't.   Well, he's probably a little concerned about the refineries, but that's probably about as far as his concern goes.  They don't know where he's actually going to go, and as of this AM his plans were still "tentative."  This means he may end up in Dallas when the rain stops there.  And we know what he's going to do, hold a little rally for his supporters.  That is what he does, isn't it?  Bend over so his adoring base can kiss his ass?
Posted by Dave R at 9:22 AM