So, it's Saturday, my 3rd day at work and, after today, I will have only 3 more days until I start my vacation.  Not going anywhere, doing things around the house... a lot of things.  Painting, lawn work, all sorts of good stuff.  I've a lot of old, old stereo equipment, including some massive Kenwood speakers, up in the attic.  That stuff is going to be brought down and hauled over to Community Aid.  About 10 years ago, when I started getting rid of stuff my Mom had shaken her 70 something head, saying "why would you give it away when you can make money on it?"  With her, as with many, many, many other people money has always been a priority.  Gimme a break.  Financially I'm fine so the couple of bucks I make selling this stuff is relatively unimportant.  Still, this does seem to be the Mission Statement for so many:  "Make money, you can never have enough, so every chance you get, make more."  In fact for some money has become so important they've put the well-being of humanity on the back burner, and others have taken that well being off the stove completely.  For these people only two mantras will do:  "my money," or "my taxes," they like to say they give to the charities of their choice, with themselves being their favorite charity.
Anyway, the Idiot Jerk is on vacation... right, just like he's been for almost every weekend since he was sworn into office.  Oddly enough, his pal Vlad also seems to be on vacation... taking a mini-break to pose for some photo-ops.  That's right, photo-ops because I don't think Vlad takes vacations because he's a dictator.  That's right, this was work for Vlad.  There are a lot of pictures of him "not working," some of them showing him shirtless, oozing his masculinity.  And the Russian people nod and say, "now that is a picture of a real man." 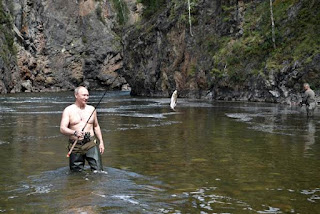 Am I the only one wondering if that fish is real?  And aren't you glad I didn't post the pic of him sunbathing?  Holy Shit!  What if the Idiot Jerk tries to emulate him?  Horror of horrors!  What if we get pictures of the Idiot Jerks standing shirtless in the surf at the Jersey shore!!  Could we even survive an almost lethal does of mind pollution?  Cover your eyes!!!
Holy Shit!!! I just realized that Vlad, the Idiot Jerk, and I will all be on vacation at the same Time!!!
Posted by Dave R at 8:11 AM