About those cold, dead hands

Okay, so it's Friday and that means I go back to work... for 3 days.  I stopped in at the store yesterday for some curtain rods and checked my sales - I beat my goal last week by 884%.  However, I have a number of customers who have responded yet so this morning I'm going to cancel their quotes.
I saw that 25% of Americans will never abandon the Idiot in the White House - that's not surprising, these are staunch republicans.  Chuck Heston would have found it far easier to let someone rip his rifle from his cold, dead hands than it is for these people to even suspect how evil the GOP has become.  This is about the same percentage that swore their loyalty to the Idiot 'W.'  They will never change.
I met with Kindred Care Hospice yesterday while they evaluated my Mom... she's too healthy, they say.  Evidently her dementia hasn't progressed far enough, which is funny because right now you never know what's going to come out of her mouth.  She told the caregiver from Kindred that she had suffered a cardiac arrest, and then added "believe me, it was very painful," and that it happened sometime after her Senior Living Facility moved her to the country for a week so they could repaint her apartment.  And the border along the ceiling?  "Isn't that beautiful?  I picked that out."  And none of it happened.  We had hoped that being on hospice would eliminate some of her frequent ambulance rides to the hospital, but it looks like that's not going to happen.
Could someone please tell me why some people show up at the gym with big gym bags which they cart around with them?  Lockers are provided, so why would you want to haul around a bag?  What is so important that you need to take it with you out onto the floor.  It's almost as weird as those people who do a set, and then take a sip of water.   They do another set and then... take a sip of water.  If they were sweating profusely I'd say "hey, buddy, you might want to take a sip of water," but their not.  There, that's 2 things I don't understand about people who go to the gym.
So, there's a big eclipse coming on Monday and I'm off work. 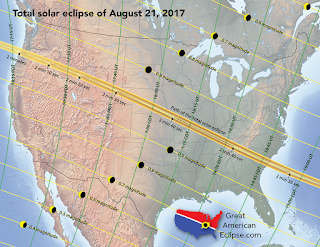 I'm in the .08 magnitude area, which means it's going to get dark, but not too dark.  I understand that sometime afterwards the Planet Nibiru is going to collide with Earth.  Let me tell you, I've got my Nikon ready for that event.  Here's an artist's rendition, just in case you miss it. 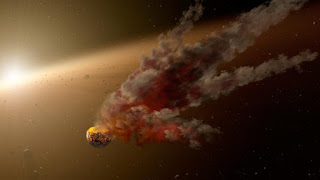