Well, here it is, the first day of my weekend and... I was up at 0500.  One load of laundry's already in the dryer and the rest of my 'fun' day is planned out in detail.
I saw where the White Supremacist Peroxide Pin-Up Girl, Ann Coulter, tweeted some sort of hate allusion to Houston's electing a lesbian mayor and Hurricane Harvey.  I would not be surprised if she ends up bald and covered with weeping scabies when her Karma hits, that's right, she's probably going to be infested with mites.  Yo, Ann, happy scratching.
And surprise, surprise, Joel Osteen is blaming social media for all of the anger coming his way - what a gutless, spineless sack of shit he is.
Oh, and the price for filling up your gas tank is going to go up - between .15 - .25 cents a gallon because of... Harvey.
Interestingly enough, only 34 % of Americans approve of the Idiot Jerk's pardon of that old, racist Arpaio.... which is, in case you didn't already know, the total number of registered Republicans in the good, old United States.  These people will never understand that they are not Sanforized, and we, the people, need to vote and shrink them into extinction, just like the dinosaurs.  A racist voice is only good when it's silenced.
For those living outside Retail World... Halloween has arrived.  Ours showed up early yesterday morning.  Bones.  Lots of bones.  Skeletal remains. 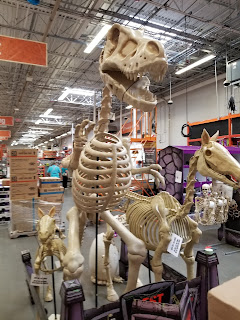 That's right, we have an 8 foot T-Rex!  Can you picture him prowling through the shrubberies of your front yard... at night, you know, getting ready to pounce through your Arborvitae.  We have a horse, too. 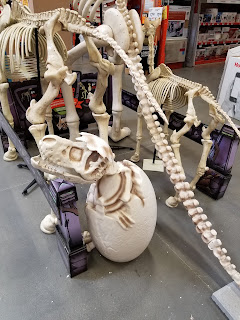