Well, let's say hello to Friday.  The temps here in Central PA are supposed to top off in the high 50's (F).  Now, ain't that nice.  There is a smudge in the forecast, however.  Snow is predicted for tomorrow, possibly 3 - 5 inches.  Notice, I include the word possibly.  So far this year their predictions for an accumulation have been... off.  Originally the snowfall was to begin tomorrow afternoon, now the stuff is slated to begin falling around 0400.  I'm not holding my breath.
I ordered a doggy heating pad for Biggie.  He had trouble getting up the back steps yesterday.  I know what my heating pads do for my lower back, so I'm thinking napping on something warm and comfy may be beneficial.
The new window A/C unit was installed in the computer / workout room yesterday, and even got a mini-workout while I did a slow jog on the treadmill.
Yesterday's breakfast with my brother went fine.  We avoided politics completely.
The copy of the PS4 Uncharted I had ordered was sitting on my front porch this morning, so I'm loading it right now.  I will give it whirl later in the day.  From the looks of it, I'd say the game was geared for teenage boys who want to have a lot of masculine fun. 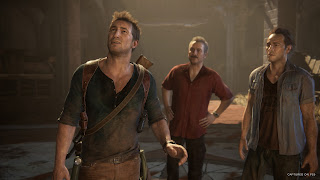 One of the effects of Putin's ruthless invasion into the Ukraine is the continued splintering of the Republican Party.  For years the GOP had been pro-democracy, I mean, they were after all the party of Lincoln.  But the Reagan happened and their philosophy began to distort, they fantasized about running the country all by themselves, where they won every election, like Putin.  And the DOA Trump showed up and rebranded the party.  They became America First, which is a literal translation of "shut up, I'm in charge and we're going to be Democratic my way, and only my way."  You know, the way Putin has been running Russia for 22 years?  Suddenly, some of those old Republican bones began creaking.  Shit.  And some of the realized that dictators are always going to be on the selfish side, that they will always need to violently put down insurrections, making them bloody.  This is not what we represent, some of them said, and the party began splintering again.  The more the party splinters, the better chance for democracy to survive.  Helping it splinter even faster and farther are Tucker Carlson, and Fox News.  No doubt Putin sees them as an asset to his violent invasion.  Hopefully, more Americans are beginning to see them as traitors.
Posted by Dave R at 8:22 AM