I scheduled a vacation day for this week, so I only work 3 days.  I do have to use vacation.  Use it or lose it.  The big orange retailer I work for doesn't let us carry it over, not that I've ever done that, at least not with vacation.  I used to do that with personal time.  Never got sick.  However, accumulating personal time is no longer an option.  They do a deposit to your bank account for the days not used.  Me?  I'd rather have the time off.

The new aquarium pump arrived yesterday and will be installed this morning.  I don't have to be to work until 1:15 PM so there's plenty of time to get things done.  I might even get in a jog on the treadmill.

I have daffodils that are ready to bloom. 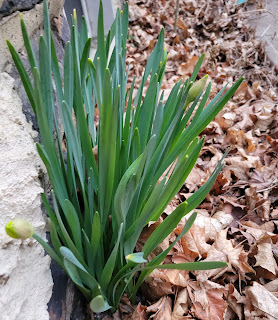 There are about 1000 truckers waiting in somewhere in Maryland who have come to protest mask mandates... Woah! they came a little too late for that party.  So, I guess they're planning a peaceable protest for all mandates which, I suppose, means most of them are anti-vax.  Covid deaths are still over 2000 per day among the anti-vax group.  It also turns out that they are 3 times more likely to believe The Big Lie.  Hhhmmm.  One can only wonder if they'll even realize the party's over.  Probably not.
And I saw Mikey Pence gave a speech to the RNC on Friday.  He said Putin apologists have no place in the Republican party.  That group includes the, Donald, the Orange Anus, Trump (aka DOA Trump).  That fool has claimed several times "Putin is my friend," or that Putin's "a good friend."  At least that's what desperate Don wants to believe, and feels the world needs to accept it as a truth.  DOA Trump doesn't understand he is no longer useful to his blow bro Vlad.  That's right, his party's over, too.  In fact, the only ones who are going to believe him are the unvaxed group who still believe there's a mask mandate.