Two deliveries are expected today:  Biggie's meds by FedEx (he loves FedEx drivers) and a case of wine from St. Michelle Winery in Washington (the state, not the city) by UPS.  Both dogs love UPS drivers, in fact I don't doubt for a second that if the dogs held a competition between the two, UPS drivers would easily top FedEx drivers.  Don't ask me why that is, I don't know.

I also bought myself a new wireless keyboard and mouse.  The old ones had wires and I am literally trying to be done with wires. 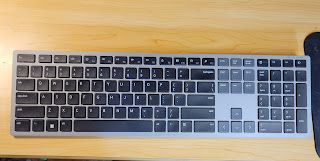 I've also set up a YouTube channel.  I can import any length video from YouTube into Blogger, but there are severe limitations when trying to import them from my phone.  So, I'm resorting to this work around.  We'll have to see how much fun this is.  If I have an enjoyable time, I may make it public.
Did everybody get a chance to see Lindsey Graham ask Kitanji Brown Jackson about her faith yesterday?  His attack was clearly to appease the Cracker Jack Crazies who were upset that Amy Cony Boney was asked a similar question.  People were very concerned that Cony Bony was nominated not so much for her fairness, as she was to push religious zealotry on America.  Let's be honest here, while Conservatives are terribly upset  about her being black, they are horrified she might take away some of the zealotry they have already packed into the court.  Here's the clip if you want to watch.  This is what sleaze looks like.
Does anybody know how Clarence is doing?  Still on the drip?