My mini-vacation begins today.  Well, I suppose you could call it a mini-vacation.  I don't have to go to the store.  That's always a good thing.  Even though we're heading into our busy season, I will admit that yesterday, for a Monday, was very slow.  At one point, just like on a late Sunday afternoon, there were probably on 15 customers in the store.

Before I left work, I picked up some dahlias to plant out front.  They will be replacing the tulips.

The window A/C unit I bought for the workout / computer room will be arriving today.  The temps are forecast to stay in the 40's (F), so I'll keep it boxed until later in the week when once again they'll climb into the 50's (F).

And I have to ask, of all the losers who aligned themselves with Trump, am I the only one surprised to find out that Mark Meadows is Trailer Trash Royalty? 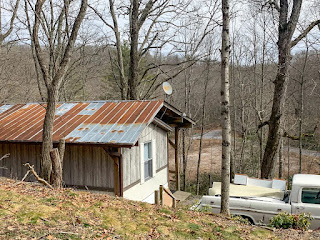 For those who don't know, this is the mobile home Mark (I'm really more trashy than I look) Meadows listed on his voter registration as his residence.  This is the North Carolina address he was living at when he voted in the General Election.  His wife was living here, too, when she voted in a run-off election as well as the General Election.  Of course, we know this isn't true.  Of course, being both a conservative and working for the Orange Anus, I don't doubt for a minute that Mark and his wife thought they were 'special.'  This is a terribly large problem with conservatives.  They don't really know their place in the world.  The fact that Meadows, being a crony of corruption, sipped from the Kool-Aid of voter fraud should come as a surprise to no one.  Every cohort of Trump is suspect.