So, here it is Thursday and I get to go back to work for a full day.  The weather forecast is for a high around 70 (F), but rain is also in the forecast.  The freezing rain forecasters predicted for yesterday never put in an appearance.  We had about 2 minutes of drizzle, and then around noon the sun started poking through the clouds.  There was freezing rain in the state, just not where I live.

Yesterday, I made lasagna.  This is so delicious.  The funny thing was, standing by the kitchen counter holding a box of lasagna noodles, I realized I could have made my own.  I have a pasta maker.  True, making the noodles would take a little longer, but then you don't have to boil them until they're andante.  I ended up freezing quite a bit.  Here's a piece on the foil waiting to be wrapped. 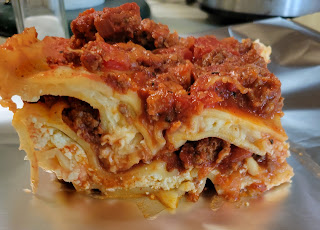 And one of those not too surprising headlines a major study has proven ivermectin doesn't work... at all.  One of the words describing this treatment for parasites was 'useless.'  With this in mind, I'd like to take a moment to thank Joe Rogan for helping kill off a number of Republican voters... which, if you think about it, proves that ivermectin wasn't entirely useless.
Evidently Will Smith was asked to leave the Oscar ceremony after the SLAP, and refused.  And now pictures have surfaced of him singing and dancing to his own music at an 'after Oscar party.'  It's almost like he's writing a book called "How To Make Yourself Look Like A Flaming Asshole."
And Joe McCarthy and Steve Scalise had a chat with Madison Cawthorn about his saying older Republicans do lines of Coke and have orgies.  Sounds like they're trying to put make-up on a pig.
Finally, there is so much buzz about Loser #45 asking the Russians for assistance, (he wants dirt on Biden), and them call him their 'partner.'  The Orange Anus is growing terribly desperate.  His rally in Georgia was... not well attended.  He's planning another one in Michigan in an area where the roads are intended for low volume, residential traffic (meaning a traffic jam from Hell).  America now knows there are 7 hours of missing phone logs from January 6, which means he and his staff weren't just using burner phones.  In less than 3 weeks he needs to testify before a Grand Jury.  And, all of this demonstrates his stupidity, because he thinks dirt on Biden is the answer.
Posted by Dave R at 8:01 AM