Today's my Sunday, but only sort of.  You can call it by a different name if you want, in fact, most of you will call it Wednesday.  Yesterday the temps his 71 (F).  Same thing's going to happen today.  Tomorrow, when I go back to work, rain is in the forecast.  Then, on your Friday, which I might decide to call Saturday, the sun will be out and temps will be warm again.  The one thing that is definite about AccuWeather is their long range forecasts, they are never right.  Why someone would choose to pay for a premium version of the app is beyond me.

Since the temps are going to be warm, I'm going to spend some time outside doing yardwork this afternoon.  There is some raking and digging which needs to be done.  I have tubers needing to be put into the ground (dahlia of course).  There's also a holly shrub (bush) in the front which needs to be cut back.  And then there is the ivy which crept down the hill from my neighbor's house.  I don't really want to use a spray, but that may be the only solution to keeping it from over running the place.

This is the 2nd day with Biggie on the gabapentin.  I've noticed walking seems a mite bit easier.  However, this is one of those drugs that takes time to reach full effectiveness.  It works fast on anxiety, but can take up to 2 weeks to act fully on nerve pain. 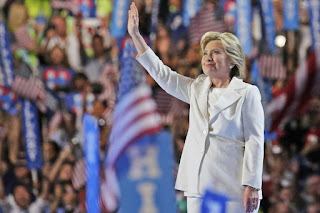 For those of you who didn't see, I know Bob posted about this, the Russians have seen fit to sanction Hillary Clinton.  Now tell me, don't that just knock the wind out of your sails? 🌞🌞🌞  She thanked them.  Let's be honest here, she is in no way on the same plateau of corruption as Russian oligarchs, so the sanction must be symbolic.   The Clinton name has always been a finger in the eye of the Republican party, so this might be a way of goading them into taking a more Putinistic approach.  Or than again, this might be nothing more than a serving of refried beans served over a dead horse.  Republicans do like kicking their dead horses, you know.
In fact, the Russians sanctioned a whole bunch of Democrats.  No Republicans.  Now we know exactly whose souls Putin owns.  Now we know just how low the GOP will stoop in their craven quest for power.  They will take aid from the enemy just so they can become an authoritarian government.  Conservatives really are stupid.