Holy Crap!  It's Monday!  I am not scheduled to work today.  The big orange retailer I work is going to pay me some vacation time.  82 hours needs to be used within the next 6 months, so I'm going to spread them out, using a couple here and a couple there.

I had lunch with friends down in York yesterday and we talked about aging (some are even older than I).  Not one of us feels old.  We do have 'aches and pains' and I have the lower spinal issue, but not of us are the stereotypical 'old folks.'  In fact, I'm fairly certain that if some was to clunk us into that classification one, if not all of us, would have to club the shit out of you.  Attitudes are changing.

Biggie's meds will be arriving tomorrow.  This is whole day he's gone with out his puppy nsaid, so I'm waiting to see how it goes.

I also bought some new sheets.  They looked a lot more purply in the ad.  I took a pic since this is one of the few times there have not been any doggy toys on the bed. 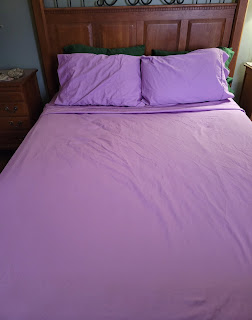 Ketanji Brown Jackson's confirmation hearings begin today.  For those of you who haven't seen the GOP playbook, you need to rut around in your closet until you find their playbook for Merrick Garland:  stall with inappropriate questions; delay as much as possible, hopefully until they get that majority they believe they're going to get this November; vote 'no' if she ever comes up for a vote.  I might be wrong on this, but while the House has black congressmen, the Senate does not.  Yep, I'm pretty sure they are all white.
And, for those who missed it, Clarence (I'm only black on the outside) Thomas is in the hospital.  You may have thought you heard someone nearby farting loudly; nah, that was only the collective horror of hundreds of thousands of Evangelicals.  They need Clarence to keep their politically stacked majority.  I find it interesting that he was admitted on Friday, however nothing was said until Sunday.  Normally, that does not portend good news.  We're being told he has flu-like symptoms that are abating, but it's not Covid.  He's on an IV drip of antibiotics... that implies something serious.  He is expected to be released in a few days.  Did he actually have a mini-stroke?  Or maybe a minor heart attack?  Or is God simply punishing him for being an Oreo?
Posted by Dave R at 9:17 AM