The Raising of the Hands

Okay, so this is the second time publishing this today.  Blogger evidently chose to publish an unwritten previous draft.

So, it's Wednesday.  Yesterday was rather uneventful.  I did go to PetSmart to pick up an algae scrapping kit.  While there, I checked out the glass aquarium tops and the dimmable LED lighting.

I also call the Vet about Biggie's prescription.  I'd like the to either increase the dosage, or prescribe a stronger med.  The Carprofen isn't doing what it died three months ago.  They did bloodwork on him back in August to see if he could tolerate a stronger med... he weighs in at 114, no problem.  I'm just curious as to what the cost is going to be.  They charge $48.70 for a month supply of the Carprofen, Chew charges 12.60 (less my 5% discount).

I did get something nifty in the mail yesterday.  Lost and Found in Space 2.  I was a big fan of the series when I was a kid, not so much so of the Netflix series, which seemed to ignore everything about the original, except for that fact that the Robinson family were the stars.  And yes, it is signed by the two authors. 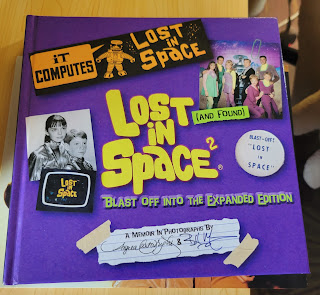 Joe Biden gave his first State of the Union Speech last evening.  I didn't watch.  I rarely watch speeches.  However, just about every media outlet noted that Boebert put her white trash roots on display.  She and Marjorie Taylor Dumbass chanted something or other.  I remember this kind of shit happening in high school, which pretty spot on when it comes to noting the mental maturity.  Biden spoke of the Ukraine, and... surprisingly, both Republicans and Democrats stood in a rare moment of solidarity.  Now, if only we could get them to stop siding with Putin.  Dana Milbank provides a very good analysis on this Republican need to see Biden fail.  This hatred for Democrats is so deeply ingrained they would support a ruthless dictator.  They are truly treasonous.
And, finally, Wendy Rogers, representative from Arizona, was censured by the Republicans of Arizona yesterday.  This stupid neo-Nazi supporter went to the same rally in Florida as Marjorie Taylor White Trash and Paul Gosar, (another brain dead Republican from Arizona) and then Tweeted glowing statements.  She bristled with rage when the vote to censure was almost unanimous.  Personally, while opposed to striking women, I do believe she deserves at least one good knuckle sandwich.  Can I see a count of hands from those who agree with me?