Yesterday was good.  Many things were accomplished: dusting, vacuuming, laundry, yardwork.  There was sunshine and warm temps, upper 60's (F).  Today, however, temps are supposed to drop, and tomorrow?  Rain.  All day.  And on Friday as well.  Son of a bitch!

Later this morning, I'm taking my car to the repair shop for them to quote me an estimate on getting the damage from my collision with the rock fixed.  I already know what I'm going to have to pay: $250.  That's my deductible.  Since this is all new to me, I'll be interested in finding out the process works.  I suspect they'll order the parts, and make an appointment for the repairs.

Biggie's carprofen was supposed to arrive today, now it look like it might be arriving tomorrow.  The only issues he seems to be having are standing up and sitting down, so I'll have to decide if he gets both pills in the morning or split them between morning and evening.  I'll go with which ever works best for him. 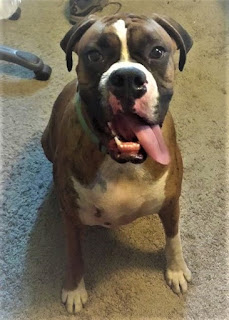 I see where Clarence (I'm far more white than I am black) Thomas is still in the hospital.  He's missing oral arguments, not that he's going to let that matter since he's always going to come down on the conservatively white side of every decision.
Finally, I was reading in Al Jazeera this morning about Putin's problem with the Ukraine.  They're reporting that he actually believed the Ukraine would collapse in 2 days and that the Russian army is struggling with, not only supply issues, morale issues.  According to them, between 7000 and 9000 Russian soldiers have been killed in the past few weeks.  In other words, Putin is sporting a really big shiner (that's American slang for a black eye) the whole world is looking at.  I'm suspect that boner he so frequently tries to show the world is really nothing more than a prosthetic.  At this point, he looks like a fool.  And, should he decide to use a weapon of mass destruction, or two, he's going to look even worse: a terrible embarrassment.
Posted by Dave R at 7:28 AM