Well, the crappy thing about today is that I have to go to work.  After that, I'm off for 4 - so I guess in the long run things even out.

There was a bit of a shit show yesterday with Biggie's meds.  His carprofen is supposed to be auto ship every 2 weeks.  Yesterday was 2 weeks since it was last delivered.  So, I went in the Chewy and discovered the autoship date was 3/24, which was 3 weeks.  I contacted them to have it fixed and... they contacted my vet to get authorization. However, my Vet had gone for the day, so some smart person in the office sent it to another Vet who decided that before he approved it, Biggie needed to have $145 blood work completed.  This didn't include a $60 visit charge.  I got very... testy.  The only reason it was sent for approval was because it went from a flavored tablet to a chewable tablet.  He has 2 refills left on his prescription.  I called Chewy & they fixed their... mistake meaning no authorization was needed.  His meds shipped this morning.  Oh, and the Veterinary Practice I take my dogs to has a much clearer picture of my and my expectations.

Here's a pic of Lily preparing to fall asleep on the futon. 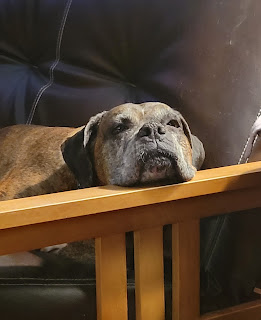 The BBC has an interesting read on how Putin is redrawing the world, though not the way he had planned.  Two points I found fascinating were: Brexit had turned the EU into and dysfunctional entity, and Trump's presidency had created enough chaos in the US to make it fundamentally useless.  Of course, nearly a month into a war the world understand how badly Putin shit in his pants.  As a result, he will continue to slaughter innocent people; the only way for him to save face, he thinks.  Every waking hour he proves himself to be a bigger loser than anyone ever thought he could be.  Thanks to him, the United States is not running this show, rather we are participating with our European Allies.  NATO is proving itself to be a force to be reckoned with, something Putin has always feared.  He prefers small, independent countries he can isolate.  That is not the case.  He is remaking the world, and it's got going to benefit him one single bit.