My scale is fixed.  Usually I get a little warning when the batteries are running out of charge, that was not the case this time.  Still, the cost of 4 AAA batteries is a lot less than the cost of a new scale.  Oh, and I stepped on it...  ... ...  Need I say anything more?  And, for the nest 2 days, because our store is in Success Sharing mode, there will be lots of food.  Today they'll be cooking out on a grill, the first time since Covid arrived on the scene.  Hamburgers, hot dogs, and tons of high calorie carbs.  Tomorrow:  lasagna.  Son of a bitch!

How about we switch to a chiller topic. We got some cold days ahead, if the forecasters are correct.  For the next 3 nights temps are supposed to be dropping down into the mid to low 20's (F).  How's that for chill?

Since this is the weekend and the blogging universe tends to slow down, I thought I might post one of my short YouTube videos.  My sincerest apologies to the French for Americanizing the name of their country.

A group of Georgia voters are suing to have Marjorie Taylor dumb ass taken off the ballot because of her insurrectionist activities.   They're using the Insurrectionist Act voted into law after the Civil War.  Legal experts do not expect them to succeed.  While I wish they would, I tend to agree.  What they're really doing is giving her more bad press she doesn't need if she wants to get her bottled blonde ass re-elected.  She is desperately trying to keep Georgia from becoming a Blue state.  While the MAGA brains of her state my thrive on her antics, speaking at neo-Nazi gatherings for example, their numbers, like their potential senators, are limited.  This lawsuit is doing her more damage than good.
And finally, I do have to correct myself on one thing.  I had state that Clarence Thomas had no children.  That's wrong.  He does.  He fathered a son with his first wife, Kathy Ambush.  You may recognize Jamal Adeen Thomas from television.  He is quite the charmer, no? 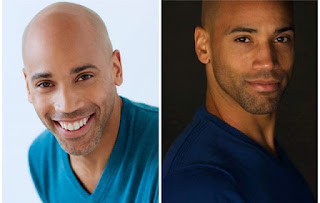 For an actor, his private life is very... private.  What is known, besides his regularly appearing on TV is that he's 52 years of age.  He is single.  There are no reports of any relationship what so ever.  Oh, and he's 6' 2".  Oh, and he's not saying anything about his famous father.