Well, Biggie just had his last carprofen tablet.  He's been only getting one a day for the past 3 days.  This is what happens when his meds don't ship on time.  To be honest, I don't know how much they help.  The gabapentin seems to be doing a much better.  He has less problems going down the back steps.  Before he rarely stood, always sat down, he also has much less difficulty in stand up.  Gabapentin takes 1 - 2 weeks to hit full efficacy.  One of our cashiers takes it for neuropathy and she says it works wonders, it just takes so long before it takes effect.

Today is also the first day of Spring! So man plants are poking their first leaves up through the ground.  I hope this year will be really colorful!  Right now the temps are in the mid 40's (F).  They're predicted to climb into the mid 50's with some clouds.  And, as far as long range forecasts go... well, we all know how inaccurate they are; forecasters can barely get the days right let alone 2 weeks in advance. 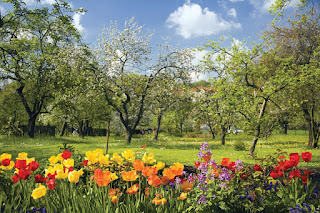 So, I've been thinking about the Cracker Jack Crazies and their desperate belief that God sent Trump to give them a Conservative Supreme Court.  I use the word desperate because... well, one of these mornings at 0300, get your butt out of bed and go outside and look up.  If you are not too close to a metropolitan area, you will see the Universe.  You will see stars light years away, as well as galaxies so very, very far away.  The Cracker Jack Crazies will tell you God created the universe: all those stars, all those galaxies, so far away we don't even know where it actually ends.  Seeing this immensity, all of this power, I wonder why is it He can only give them an American president by flipping the Electoral College.  That seems like... well, the tip of a little finger move for something they say is omnipotent.  Maybe He has to use the Electoral College because their numbers are not as great as they think.  And this last election?  2020? The one they said was chosen to give them what they want lost, and attempted a coup, and then started The Big Lie because he believed the Supreme Court he packed was going to throw the election.  Hell, this does not say much for omnipotence does it?  That their deity would need to resort to such deceit?  Perhaps if they weren't so stinking desperate.