It looks as though the Forecasters were a tad off on their temp predictions for this week.  Today we're only to get up to 93 (F) rather than 98 (F).  Now, I know that's not much, but every degree cooler helps.  Believe it or not, we're over halfway through August.  September is just around the corner.  Next thing you know people will be celebrating pumpkin pie spice season.  In case you wanted to know, I hate pumpkin spice.  Love the pie, hate the spice.  When I was growing up, the only spice used in baking pumpkin pies was cinnamon.  What can I say?  We're a simple people.

The inflammation in my lower back has moved to my right side.  This is an indicator things are improving.  This is how it usually works:  moderate pain with spasms across the lower back, then it moves to just one side, either left or right, and then finally to the other side, and then it goes away.  The entire process takes about 4 weeks.  Thank god for heating pads.

And yesterday was slow at work.  Really slow.  I had an install cancel, no problem.  The customer said he was going to go with Peel & Stick tiles.  You just peel off the paper backing and stick them to the floor.  This means that instead of paying $1100, he's going to be paying $70.  No brainer.

I made some small bags of my snack mix to take to work.  Yum. 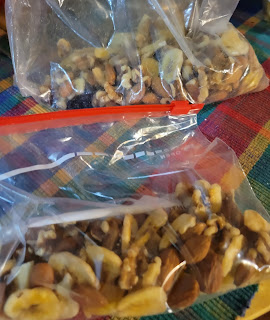 And, of course, Charlie Watts died yesterday.  When I saw that headline I had to pause for a few moments.  I was never a Rolling Stone fan, but they did impact music around the world.  A large part of that impact was because of their drummer, Charlie Watts.  He is  part of a musical heritage my generation understands.  He was a quiet icon.  Without him, the Stones might not have existed.  I know that no one lives forever, but it is always so difficult to say goodbye.