Crap, I slept in again today.  The alarm went off, I got out of bed and walked across the room to turn it off, and then climbed back into bed.  I guess this means I'm going through the change... or, well, at least one change, which is quite different then going through 'the change,' since that change is rather impossible for someone of my gender.

Lily's cake is baked, and I'm sure it's going to be tasty.  I even took the time to buy some decorating icing and put her name on it.  No laughing.  Decorating is not one of my hidden talents.  I realized after I brought the tube of pre-made red icing home that I was also supposed to by a special tip.  Believe me, Lily is never going to know what this looks like. 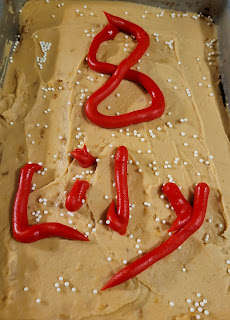 And Alabama no longer has any ICU beds available.  I feel sorry for those people down there.  Today Lily's going to get cake and ice cream while those people down there are still being fed the same lie, and right now it's a little too late to change.  I understand more have been getting vaccinated, however it's too late.  They should have started the vaccination process 8 weeks ago.  Getting your first shot today is not going to keep you from getting Covid, it's not going to keep you from being hospitalized.  Antibodies need to time to grow, they don't just suddenly happen.

And there was a lot of patter on Social Media yesterday about Governor Abbott jumping on the Regeneron train.  One of the doctors who approved his treatment Tweeted that even though Abbott was asymptomatic, he was terrified he was going to get Covid.  You would think that by this time, the man who claims to be a Christian would have realized he's damned to the fires of Hell.  This is what happens to phonies, and believe me, it's too late for him to change.