Well, yesterday at work was slow.  I was going to stretch the letters out so you might get some idea but decided against it.  Sometimes a simple, brief sentence says everything.  Boring is also a good word to describe yesterday.  This is how it goes.

Two days left before my weekend.  The temps are going to be climbing into the upper 90's (F).  No rain is in the forecast.  We're finally hitting our normal August and I'm beginning to wonder if our seasons have some how been delayed by Climate Change.  The truth is, we have no idea how things are going to go.  This is all brand new to us and so many are completely unprepared.  At some point, we can expect those living in the areas effected most to move away, to migrate to cooler, safer climes, or the coastal flooding will get so bad they'll migrate inland as the coastline slowly changes.  This is what happens when a large group of individuals favor mythology over science.

So, I decided to buy my walnuts in bulk.  I could by the same brand of walnuts on Amazon as I buy at my neighborhood Giant, but there wasn't really that much of a savings, so I switched to Kirkland.  I'll find out how good they are later this morning. 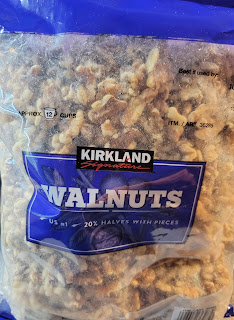 And I saw that 2 of Loser #45's minions were doing their best to slow down the infrastructure bill.  One of them is from Tennessee, a poor state that could sorely use this bill.  Of course, they're not going to succeed, and more then a few Republicans will tout this bill when it comes time for re-election.  And the fact that this bill will be popular in Tennessee is going to hurt the minions when there names once again appear on the ballot.  And when this bill passes Loser #45 is going to throw a shit fit.  The only legislation he got through was a tax break for the wealthy.