Good Morning, people.  My weekend has begun with a somewhat cindery moment.  Last evening I watched the last episodes of "Loki."  It's okay, not great, though they do say Eli's favorite word (shit) every now and then.  I got the coffee ready for this morning, ( I always do that the night before, so I just have to turn on the coffee maker).  And popped the ingredients into the bread maker so I could wake up to freshly baked bread.  However, this time I decided to go with a standard white bread, rather then Italian.  Big mistake.  Around 3 in the morning, I woke up smelling smoke (insert Eli's favorite word).  Going downstairs, I found smoke pouring from the top of the bread maker (you know the word you need to insert).  During its final rise, the loaf had increased in size so much the dough cascaded down the sides of the baking pan, onto the heating elements.  There was no fire, I don't even think there was a chance of one start, but that burnt bread was stinking up the house badly and I was worried the smoke alarm was going to go off.  Damn! 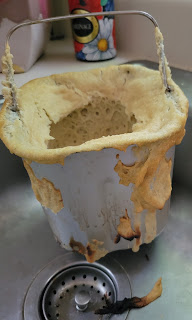 And after my weekend is over, when I go back to work on Wednesday, things will have changed.  We're going back to wearing masks.  People are not happy.  When one of the associates in my department began complaining, I shot back at him, "well you know who's to blame?  Those dumb, fucking Republicans who aren't getting vaccinated."  In case you are wondering?  He's one of those Republicans.  That's right.  He believes The Big Lie, but nothing about Covid.  He's one of those who believes he's immune.  What he really needs is a 2 week vacation in ICU.