That's right!  After 5 complete days, my Friday has finally arrived.  I cannot wait this work day is over, especially since I know every day I have to work at the store is one less day until I go part-time.

My brother sent me a text yesterday telling me he wanted to have a little family get-together over the labor Day weekend.  He had mentioned this over breakfast a while back and I had told him I work every holiday.  I reminded him of what I had said.  I did put in a request, but I know it's going to be denied.  He suggested Sunday, September 12 if Labor Day doesn't work, which is 4 weeks away.  He, like so many other people, does not understand there are over 200 associates working in my store, and many of them want weekends off, and they can begin requesting for those weekends 90 days in advance.  This is why a majority of my Fridays begin on Tuesday, or Wednesday.

So, I got a notification from my running pod that the battery needed to be replaced.  It turned out to be not so easy peasy because the sucker's tiny.  Now it doesn't work and I'm tempted to throw it in the garbage.  My watch does the same thing, except it doesn't provide all of the details, and I'm wondering if maybe for me, the details aren't as important as they are for someone who needs to track their runs. 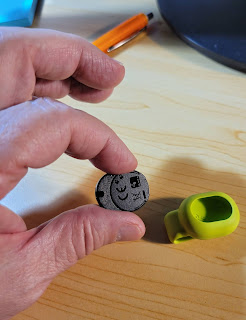 And I saw where they're predicting the climate is going to get worser quicker, at least that's what a UN report is stating.  Of course, you know it's going to run into the brick wall that is Conservativism.  Their focus is on making money, and greed.  What's actually happening is that the planet is getting warmer, and that warmth is hastening evolutionary changes in many, if not all species.  These are two truths Conservatives will never believe.  To do so, they would need to admit that everything they believe, or at least most of everything they believe, is an utter lie.  And like Liar #45, the truth is nearly impossible to find in their minds.  But don't worry, as part of the evolutionary process, they will die off.