Well, the Staycation has begun.  Nothing is really planned for the next 6 days.  This means I'm wondering if I'll end up taking a personal day next Saturday.  Now why would I do that?  I'm scheduled  off on Sunday, and that would give me 8 days in a row.  The temptation is there, believe me.

I watched the Disney / Pixar film Coco last evening.  It was entertaining.  I was surprised, I thought it was going to be a musical.  The song at the end, the one that won the Oscar?  I thought it was nice, but evidently didn't find it as emotional as some did.

And there's now a movie on tap for tonight.

Biggie's laying on the floor looking at me. I didn't have my regular breakfast, which has changed from the oatmeal.  Now it's an egg over easy and a slice of homemade Italian bread.  Usually, he and Lilly get a lick at the bowl, but this morning I had cottage cheese with blueberries and walnuts so that didn't happen today, and now brown eyes are damning me to hell.

And yesterday The Guardian published an article blatantly points out what many of us have known for months, that Republicans are killing their own voters with Covid.  For them, the comparison of Republican Governors is to Nero, who's now seen as a psychotic.  You know?  Letting Rome burn while he fiddled away on some hill.  And, evidently that ass Abbott went to some loon festival celebrating no masks and no vaccines and played his fiddle.  I think it's funny, they call themselves Patriots and I call them suicidal.  Truthfully, I wouldn't be surprised if everyone in the picture has been vaccinated.  You know how Republican minds work.  It's always the little guys who pay the price. 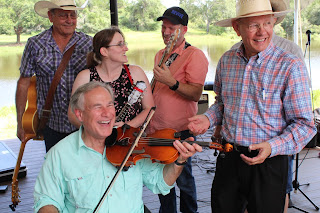