So, I slept in again.  I suppose this comes with maturity, or maybe I just stayed up a little too late last evening.  That's a bad habit I don't want to get into: staying up late and then sleeping until noon.  We have a customer like that, doesn't get out of bed until one or two in the afternoon.  This means she shows up at the store around 9PM needing to talk to the specialists who have left four hours earlier.

The gas company dug up the street in front of my house yesterday.   Of course, there was a parked car blocking them and it too was in front of my house.  When I told the job foremen it belonged to the couple who were having the new gas line installed, his glance back over his shoulder at their house was almost priceless.

The dogs were in and out of the house throughout most of the morning and into early afternoon.  Last evening Biggie's right rear hip was paining him, so I'll make an appointment to take him to the Vet next week.  He's going to be 7 in December, and he's a big dog, and that means he's got a bit of arthritis back there.

And I gathered my fruits together yesterday to make my snack mix.  I'm tossing in some dried mango this time.  My dried blueberries are running low.  Dried cherries used to be my choice, but they tend to get sticky, so I'll get some more blues. 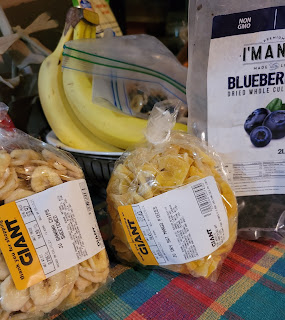 Down in Texas they've issued arrest warrants for those Democrats who chose to leave the state rather then vote on that racist voting rights act, 52 of them, I believe.  The state almost flipped blue during the last election.  Now, thanks to the incompetence of Abbott dealing with Covid and Climate Change as he tries to appease the dying Republican base, the possibility of the state staying red is getting tossed to the wayside.
Oh, and Cuomo resigned yesterday.  Good.  He learned the hard way that he's not special.  This is something we need to take the Republican Party.  We need to teach them they're virtually useless, and we're going to need to do it the hard way.