The Best of Plans

Well, Tuesday has arrived.  Temps are surging up into the mid-90's (F) today and were 3/4 of the way through August.  I don't expect to see any kind of temp drop until mid September, which is pretty much how last summer played out.  summer hung around for a while, and then it got really cold quickly, but then it warmed up again.  And no, the warm-up wasn't Indian Summer.  I don't believe we had an Indian Summer last year.

Yesterday was rough on the back at work... no ibuprofen or naproxen, and boy did I stiffen up.  Every turn was a bit of a lurch.  This morning, however, things are better.

Our sales rep for Bali blinds was in the store yesterday.  Very nice, but a real talker.  Also an anti-vaxxer who also believes the sore throat she had very early on last year means she's already had Covid.  Never been tested, of course, and more then a smidgen overweight, so when she does contract it, she might have problems.

For those interested, here is the very first page I wrote for The Body in the Loch.  I had no idea there were going to be so many Big Changes ahead.  Writing is a lot like life.  Every day is a first draft, you you wake up, you eat breakfast, and make plans, and then life takes a red (or black) pen and begins editing.  And so we compensate, and adapt, and delay, and eliminate things from our schedule.  I find it amazing that for some people, their only plan is to make it to the end of the day. 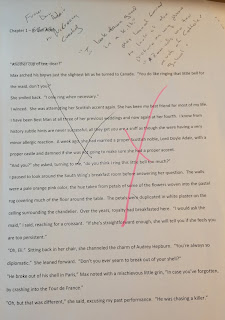 I saw where Ronnie DeSantis was flipping out because the media reported that one of his largest donors owned a large amount of stock in the company that makes Regeneron.  This is anti-vax, anti-mask Ronnie, who's pushing a treatment that only works for some of those patients who are the sickest, and even then it's not a cure.  Ronnie says the report is going to cost lives.  Someone should sit Ronnie down and tell him wearing masks and getting vaccinated is going to save many, many more lives then relying on Regeneron.  But he's a conservative, and his priority is not human lives, but in make sure his rich donor is making money.  In case you didn't know it, this is part of Ronnie's plan on getting his ass elected into the presidency.

Email ThisBlogThis!Share to TwitterShare to FacebookShare to Pinterest
Labels: August, DeSantis, Regeneron, sales rep, The Body in the Loch