We ended up getting a fairly large amount of rain from Henri, but not nearly what they received up in Connecticut, and Rhode Island, and New York. We got a lot of drizzle, wizzle soakers, and they got a long downpour.  Over the next 4 days things are supposed to warm up.  With all the moisture in the ground, that's going to translate into hot and humid days.  I am not excited.

I've started a core routine to my work out.  It's pretty much the same stuff I had when I was in PT for my back 6 years ago.  Breaking out the power bands I'd bought back then,  the 'light strength' green band  snapped the minute I gave it a trial stretch.  Everything ages.  Nothing lasts forever.  As we get older, weakening core muscles become a problem.  In 15 years I don't want to be walking around nearly stooped in half.  The older we get, the more we need to do to fight the aging process. 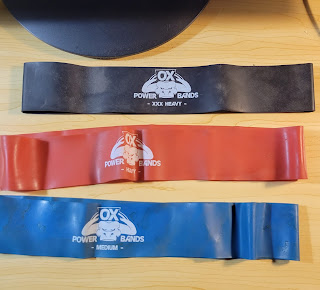 I had to take my car to the dealership because of recalls and for some reason they gave me 3 free months of Sirius XM.  I don't have a subscription. and thought this is a nice change to listening to the music I've bought and downloaded.  I might consider getting a subscription if they'd offer an Alternative Music channel without the DJ.  Having to listen to a babbling bubbled headed DJ is not what I want to listen to when driving my car.   Why anyone needs to have a radio personality chitter chattering away is beyond me, yet there are those listeners who practically live for their DJ.
I understand Loser #45 had a rally in Alabama over the weekend.  Before he launched into his medley of falsehoods leading up to his rendition of The Big Lie, he mutter something about getting vaccinated, and the MAGAs in the crowd booed.  Not that this bothered him, for 2 seconds later the crowd was cheering as the deceits began rolling from his lips.