Contrary to what some may believe, going part-time has given me a greater awareness of the days of the week.  Perhaps this is because my work calendar changes.  Days no longer run into each other.  For example, this week I work Thursday and Sunday, so when I look at my calendar those days stand out.

And, speaking of Thursdays, next week is Thanksgiving.  One of the gathering holidays, when we're supposed to give thanks.  I know the pilgrims supposedly gave thanks because they had managed to survive a year in the New World.  Survival has changed, but it is still an integral part of our daily lives.    Even though I enjoy the holiday, I do think we need to temper our belief that this is just a gathering moment for family and friends.  When I was growing up, Thanksgiving meant the men stayed in the living room until it was time to enjoy a turkey meal, and the women stayed in the dining room and kitchen cooking, and serving, and cleaning, and then eating, but only after the men had eaten their fill.  For many families this is still the case.  There just aren't enough seats at the table for every body to sit down and eat at the same time.  This is not a gathering.

Speaking of survival.  Yesterday, as I was taking out the garbage, I looked down to see an earthworm shriveling up on the ground.  It's cold out, with night temps dropping down into the low 30's (F).  Worms are not intelligent.  They have a simple nervous system, no brain.  When a worm says "you're getting on my last nerve," he means it.  He only has one.  So, I upped that earthworm's chances of survival.  I picked him up and dropped him in an empty terrarium I have, dropped in a couple handfuls of leaves, and sprinkled everything with water.  I have no idea if this is going to work.  Has anyone out there ever tried worm rescue before? 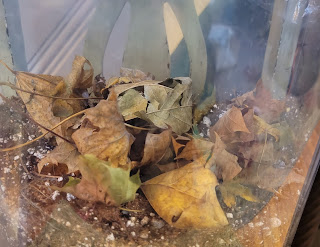 And what about Gary Palmer, Republican representative from Alabama taking credit for the infrastructure bill he voted against?  Yep, this loser sure did.  Here's his website where he takes credit.  I called him a lying sack of shit on Twitter.  I'd have sent him an email, but you need to be a member of his district to get that privilege.  There is a phone number on his website where you can call and leave a voicemail.  Loser.