For some of you, this is the end of the work week.  For me, it's just another day off.

I ended up going to work late yesterday because my Christmas gift to myself was being delivered.  And I was told I needed to monitor my tardiness... Ouch.  I got to work late 3 times since July, (4 counting yesterday) and the great Orange Retailer I work for has policies.  No problem.  I mean, it's not like I was testing the system... well, maybe kind of.

A bit on fitness:  for years I've been under the belief that you should drink a protein shake prior to working out, or during the workout.  Protein helps build muscles, right?  Well, it turns out that if you're trying to burn fat calories, that's the wrong thing to do.  You end up burning the calories in the shake.  Those who drink the shake after the workout end up burning more fat calories.  If you think about it, it makes perfect sense.

So I made those Moroccan chicken meatballs.  Lots of spices: paprika, ginger, cinnamon, cumin, with a little brown sugar. 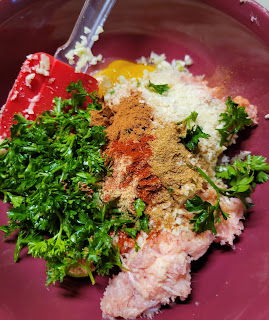 If you remember, I said I thought it odd they were using chicken, a mild meat, rather than lamb or goat.  Well, I was right.  They look delish, but all you taste are the spices and the yogurt, lemon, garlic sauce. 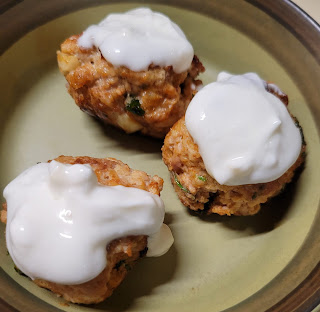 If you're really into spices, you might love them.  I thought they were rather meh.
And I saw that the Republicans up in New Hampshire voted for censorship of their school libraries.  As might be expected a group of conservative women, Moms for Liberty, Tweeted out they would pay a $500 bounty to those reporting teachers breaking this law.  Governor Sununu called their Tweet bullshit.  Does he really believe that's going to stop these hatemongers?  The Mom's of Liberty are desperately trying to take us into an authoritarian government which censors everything it doesn't like.  These are the kind of Moms that Josh Hawley should hate since their main goal is emasculate society.