The Time to Change

Yesterday afternoon was sunny, the temps were warm.  A loaf of bread baked as I began working on the aquarium: a change is on the way.  And then the temps outside began to drop.  As the sun rose, the temps were a cool 31 (F), cold enough to start putting the roses into hibernation.  The foliage for the dahlias will be gone soon.  This is the time of change.

I went to see "No Time to Die" last evening, the latest Bond flick.  This is not your average 007 thriller.  The color palette reminded me of a film from the late 50's to early 60's, filled with deep colors and shadows.  Daniel Craig played the oldest Bond ever, easily a man in his late 40's, a spy brought out of retirement.  There is a lot of dialogue.  And don't try thinking about the Nano byte threat which defies logic.  Rami Malik's villain seemed too wispy at times.  This is my way of saying there are some problems.  Nothing to keep me from not liking the movie, but things my brain needs to just pass by rather than think about. 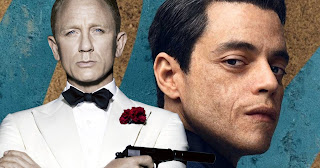 Oh, and there was an election yesterday, for those who weren't paying attention.  The Republicans did well, Democrats poorly.  This doesn't mean that Democrats didn't go out and vote, they did, especially in Virginia, however more Republicans and Independents voted for Youngkin.  Some want to blame Biden, yet the Democrats inability to show a united front hurts, paraphrasing Dana Milbank.  Sinema and Manchin's refusal to compromise demonstrated an ongoing problem:  Democrats can work together.  They need to take "my" out of their vocabulary and replace it with "we."  Americans don't want a maybe, they want a yes, and several Democratic members of Congress simply don't understand that.  Republicans defined Critical Race Theory as all white people are to blame for racism and scared the shit out of white voters in Virginia.  Democrats need to come up with a way to attack this lie, otherwise they will loose for the next 3 - 4 elections cycles.  This is the time to change... not wait.