Blogger seems to be moving very slowly this morning, so I'm wondering if I'm sufferings through some flawed update.
Holy Crap! it's Monday morning and I woke up to a freeze warning for early Wednesday warning.  You all know what that means, don't you?  Time to set the mousetraps.  We've already had some cool evenings, so I'm sure some have already started moving into their warm and comfy, and very dangerous winter lodgings.

The cooler air is also going to see a return of my oatmeal breakfasts, which might cause me to slow down my breadmaking a bit.

Yesterday was spent lollygagging around... so to speak, with a chore thrown in every now and then just to say I hadn't wasted the day entirely.

The pot rack is now installed in the kitchen and a new LED light bar is attached.  My kitchen is now very bright.  Next up will the the chore of tiling the wall beneath.  Tiling is not that difficult if you use mosaics, I wouldn't want to tile with 4 x 4's as I'm positive everyone entering my kitchen would see the angle of the slant.  For some reason, keeping things in a straight line is difficult for me.

A smoky leek and potato stew is planned for today.  We shall see if it turns out looking like this. 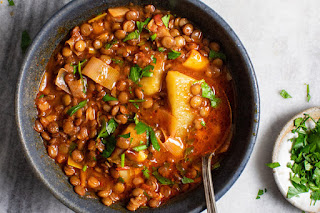 Here's an interesting bit from the Washington Post.  Indigenous tribes in Brazil are fighting back against an onslaught of Evangelical Missionaries.  Good for them, since one of the largest monotheistic religion's main goal is not to convert, as they claim, but rather to dictate and control.  This is especially true of the Evangelical branch which has become politicalized and polarizing in this country.  These indigenous people have had enough.  They are sending these culture destroyers packing.  Good for them.