Coffee and a Klondike Bar

Late post today because it's my birthday.  That's right.  I've aged a year.  Am I like fine wine?  Hell if I know.  I do know I'm older, and if the adage is right, older and wiser, I must be pretty wise.  Oh, and the late post doesn't mean I slept late.  That did not happen.  At the earlier hour of 0715 a phlebotomist was extracting some of my DNA rich blood for testing purposes.  No one told me whether I should eat or fast, so all I had for breakfast was iced water.  Until I got home.  Then I started my day with Coffee and a Klondike Bar.  Can we not talk about nutrition? 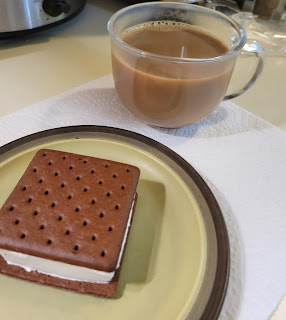 My sister called and had Alexa sing Happy Birthday to me.  The dogs could hear her over the phone and were not pleased by her electronic voice.  Tomorrow I'm being taken out for breakfast, so I'm going to stretch this celebration out as long as I can.
While waiting for the guy with the syringe this morning, I was checking out the NYT.  Covid deaths among red voters are higher than blue voters.  Also, men are taking a bigger hit than women, which means that little bug is sexist.  While the number of deaths appears to be on a slow decline, no one knows what's going to happen next.  Fall is approaching.  Vaccines work better than natural immunity at preventing infection, so the laugh might be on those who think they've safe just because they have already had Covid.
And finally, there is evidently a growing fear among the GOP that Loser #45 is going to run for president in 2024.  They see that possibility as screwing them over in the mid-terms next year.  I've said this before and I'll say it again, he's not here to give them what they want.  He is here to destroy them.