Well, it looks as though we have another drizzly wizzly day outside.  Yesterday the sun was nice enough to shine down in the afternoon, but only for a few hours before the clouds began rolling in.  Tonight, temps are supposed to drop below freezing.  This is how autumn happens.  What winter will be like is anybody's guess.

Yesterday was rather uneventful.  Chore that had been planned were accomplished.  I wrote.  I played a video game.  Right now I'm playing through the Mass Effect trilogy.  The first time I played through it I thought it was great.  Now, well, I see problems.  Bioware, attempting to go bigger and better, kills off the main character in the beginning and then has him resurrected through science.  You get new companions and new game mechanics.  Meh.

I cooked the smoky leek and lentil stew yesterday.  The recipe ends up with much more than I was expecting, so I'll be having stew today.  I'm going to add a garnish of shredded swiss cheese for the warm-up since I'm not really wild about parsley.  Here's what mine looked liked. 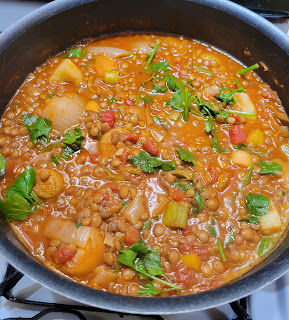 Okay, so yesterday I saw in JMG that Frankie Graham posted more of his nonsense on his Facebook page (no link) on how Climate Change is pretty much the wrath of God killing people who reject his (notice the lower case) religion.  Evidently the fact that a number of these people who have already died by fire, and flood, and heat, and cold, and have been Christians is something Frankie has chosen to overlook.  Truthfully speaking, there's a lot of horseshit in Frankie's barn that he needs to clean it out.  That'll never happen since he's more interested in trying to prove he's a Cracker Jack prophet... something he will never, ever be.  This man knows the corrupting taste of power, and likes it.