Friday.  For some of you it's the ending of the work week.  For me?  Another day off.  Of course we have some delightful precipitation outside, which seems to becoming the normal.  If we had a bit of a wind, that breeze would stripping the leaves from the trees.  The air is still, however, they're going to have to rely on gravity.  Because we had a fairly wet summer, there are lots of leaves that will need to be raked.  The two previous years I didn't have to worry.  This year is different.

Yesterday was hectic at work.  One of my associates kept disappearing, so I needed to keep paging for assistance.  At one point, while I was designing blinds for a German woman, she mentioned 'your reclusive' associate.  I laughed, since the person in question isn't reclusive, just lazy.

One of my favorite game series is Mass Effect (except for the ending of the 3rd installment).  They studio came out with a 'legendary' edition, where they made some updates.  They put out a 4th installment called Andromeda, which didn't do well, so they put the game on hiatus for a few years.  Then suddenly 2 years ago there was a teaser trailer and the gaming world gasped in surprise at the glimpse of popular characters returning.  A few days ago, on November 7 (the day before my birthday) Bioware released a poster and the gaming world is a chatter.  Like many, I had to blow it up way out of proportion to scavenge for details. 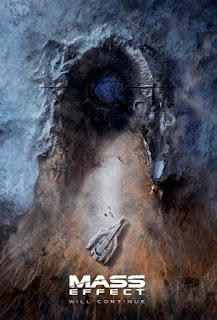 A few interesting tidbits:  Among Americans, the only group who doesn't see climate change as serious are Republicans.  A lot of this is greed.  It's more important to make money than worry about the climate.  A lot of it is the effect of Loser #45, who many want to enshrine.  But a lot of it is also that they are stupid.  This group hates science.  They do not understand there is no way to maintain the 1950's status quo they so dearly love.  This group is going to be responsible for so much pain and suffering.
Another interesting bit is about Evangelicals.  Oh, wait, let me correct that to read White Evangelicals.  In case you haven't realized it, they proportionately dominate the Republican Party.  This group does not believe in systemic racism, since blame would fall mostly on their shoulders.  In their mind, their beliefs make them special.  They think their faith was chosen, as was their color.  If this group ever got into power, they would make the Spanish Inquisition look like a Garden Party.