Yesterday was different, somehow oddly out of sync.  I took a friend for an out patient procedure in the morning which was supposed to take about 3 hours... well, I was called after and hour and told the procedure was complete.  I budgeted for 3 and used 1.5.  I expected to have to sign for my Xbox Series X when it arrived... not the case.  I received a text telling me my new, expensive console was sitting on my front porch.  Oh, and speaking of the Xbox Series X:  Lily found the console fascinating, even though she can't play... no fingers. 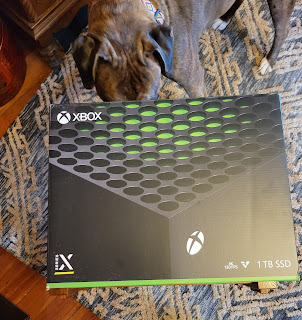 And nutritionally speaking, yesterday was also a bust.  I ended up eating taquitos and hot dogs.  So much for my street cred on being a healthy eater. Well, it happens to the best of us now and then.
My Xbox Series S has been reset and is ready to go to it's new owner.  That will happen Sunday.
I didn't use the treadmill at all.  I told myself I was taking a rest day.  I then felt slightly guilty because I know how much it helps.  I can feel a bike ride coming up soon.
A headline flashed on my email last evening from the Dallas Morning News.  Evidently the good people of Texas do now want their politicians (read Republican) deciding what books should be in their school libraries.   This is what happens when you have a small, minority group in power that doesn't give a shit about the majority.  Trying to appeal to the 33% who love you while ignoring the other 67% of the voters is going to get you into deep trouble.
And then there was this about the use of burner phones on January 6.  No wonder Loser #45's team is desperately trying to keep the communications logs for that infamous day cloaked in Executive Privilege.  Some how I doubt very much if Eric was calling out to a rioter asking him to pick up a pizza (no mushrooms) for the coup party that evening.
Finally, I have to mention Sean Parnell, the Trump backed candidate who wanted to take over Pat Toomey's seat.  My, his campaign ended with a terrible thud after custody of his two children was handed over to his wife.  You see, Sean has a problem with verbal and physical abuse, two of the many things Republicans will overlook in a marriage.  Remember, they're the patriarchal party.  Except, this sort of shit doesn't play well with voters.  So, Sean is gone.  Tough shit.