This isn't that complicated

When I got up this morning (for the 2nd time) the temps outside were a crisp 30 (F), and they're supposed to drop below freezing for the next few days.  That's fine with me.  I was also up at 0300 because Biggie had to go potty outside.  Just like an old man, he gets up in the middle of the night to go to the bathroom and grab a midnight snack.  Of course, Lily joins him; she likes her biscuits, too.

My Thanksgiving schedule was posted yesterday - 4 days off in a row, only 19 hours.  It took me a few seconds to realize those hours didn't include holiday pay.  I'm not working Black Friday.  Though, surprising, I'm considering going in from 1100 to 1600.  Of course, I'm also considering I might not.  One of the nice things about being part-time is that I can volunteer to work hours if the need them.  This is not that complicated.  I tend to do what I want.

And this morning, breakfast is an egg over easy (with fresh thyme) and a slice of homemade Italian bread.  A very uncomplicated meal. 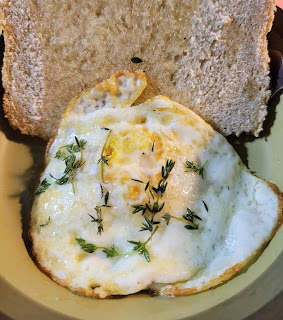 I find it amusing that so many are trying to read the tea leaves after Tuesday's election.  Republicans are elated and Democrats are flustered.  Honestly, when I heard McAuliffe was running for governor of Virginia I was surprised - he's old school.  As such he made mistakes, believing he could make this race about Trump one of his biggest.  Democrats need to look at the changing dynamics in the country.  The census of 2020 showed for the first time that white people are declining in numbers.  For many Americans, this was a wake-up call. These voters see Critical Race Theory, even though they don't know what it is, as a major threat.  When Youngkin brought up Toni Morrison's book, Democrats had nothing to counter.  He already had the white Republicans, but suddenly white Independent voters grew alarmed.  The last census set the stage for a future they see filled with serious complications..  They believe Youngkin, and the Republican Party, are a way for them to hold onto the status quo.  That's not going to happen.