A soggy weekend has begun.  Outside, the rain is steady, not heavy; what we like to call a soaker, where there is just enough time for the rain drops to soak into the ground.  They're forecasting 1 - 2 inches, which is basically a drop in the bucket to the 2 feet Ian dropped on Florida.  Temps today are predicted to hover in the upper 50s (F).  Sadly, that temperature is one at which grass will continue to grow, so I'm expecting to be mowing my front lawn next Friday.

Tuesday, the plumber will be here to give me an estimate on the water hook-up on the 2nd floor.  I could almost envision $$$ adding up in the receptionists head when I told her where the new washer was going to be located.  As I told her there was both a sink and a shower on the other side of the wall, I could hear those $$$ draining out of her voice as she said, "oh, that'll be easy."

Also, I'm going with a ventless dryer, (yes there is such a thing.)  I can't see spending $500 to have some contractor lean a ladder up against the backside of my house just to chop a whole in the wall for a vent.

I do get to work today, so I'll probably post a pic or 2 tomorrow of the updated Flooring Department.  They did transfer a full time associate into our department as a specialist.  I can see him spending a lot of time back in the employee lunch room to avoid having to design blinds, and work with quotes on floors.

Here's a pic I took of the dogs this morning.  I call it Rainy Day Dogs. 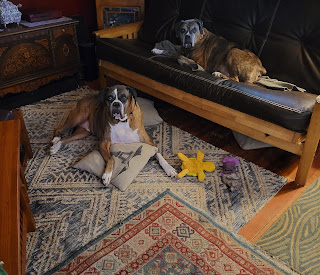 I got a notice from the USPS that my mail-in ballot should be arriving either today or Monday.  I'm betting most of you can already guess who I'm voting for.  This my part of trying to save Democracy in America.
There are... rumors... Sammy Alito is not too happy with fellow judge Elena Kagen.  I'm sure there are a number of reasons this could be true:  she is female, for one.  It's understandable that a man who referenced a 17th century jurist in his decision to overturn Roe might question the superiority of women's voices.  He doesn't understand, history will not be looking kindly on him.
For those outside of the state, the attack ads on Fetterman are everywhere.  Oz has narrowed the gap, at least according to polls.  This was done with endorsements from the Fraternal Organization of Police, and the State Police.  They're trying to paint Fetterman soft on crime.  It's the only thing  they have.  That, and his tats, which Tucker Carlson wasted a 20 minute rant on, at least that's what I've heard.  Republicans aren't even going near the abortion issue, which means they're writing off a majority of the voting base.  One of the many reasons I'm voting blue is to send Ozzie back over to New Jersey, where he belongs.