Sunday.  Hhhmm.  Sundays tend to be the only day of the week that I put in 8 hours at the store.  I don't mind.  Business heats up a little bit when we get the after church crowd.  Right now, almost all of our Halloween decorations are on clearance. Christmas decorations have been up for the last 2 weeks; lots of very expensive fake Christmas trees.  I, myself, don't decorate, though I do have my all season skinny tree.  If I do get into the mood, I could always through some Christmas balls on that.  Oh, yes, and that's right, when I was little we decorated our Christmas trees Christmas balls, and stars, and tinsel.  Here's an old, faded shot of what Christmas looked like in my house when I was a teenager. 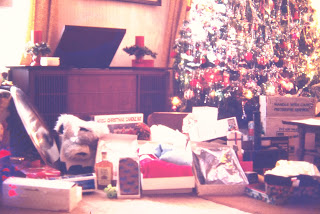 That picture's from the house on 21st Street.  We moved there when I was 13.  The kids in the neighborhood I hung out with all had bikes, I didn't.  Hope upon hope, I wished for one for Christmas.  At that time, I was old enough to know there was no such thing as Santa, so one day I asked my dad if I was getting a bike for Christmas.  He shrugged and said "no."  Of course, I was terribly disappointed, but there really wasn't anything I could.  On Christmas morning, standing next the tree was a shiny, black road bike.  I was in heaven!  It was what I'd been praying for.  A few days later, my mom pulled me aside and chastised me.  She told me I should never have asked my dad if I was getting a bike, and that by doing so I had put him into a terrible spot.  He had been forced to lie to me.  I had made him feel guilty for having to lie and I was bad for having done that.  After 56 years, I still remember that day.  How screwed up her head must have been to feel the need to ruin what should have been a good moment.
Trump had a rally in Texas yesterday where he spewed hatred.  I didn't bother to check for pictures of the crowd size, his group has been using smaller venues in order to make his crowds seem larger.  Smaller crowds do not mean smaller Cracker Jack Crazy turnout at the polls on November 8, keep that in mind.  As his rallies continue, his lies get worse.  Let's face it, nobody lies like Donald Trump, but then he has always embraced deceit as if it was his next of kin.  Another thing his rallies are embracing is the Q version of Christianity.  I don't know if any of you have seen this pic, but a number of Qs find it transcending.  What most of them don't realize, is that the face of Jesus is actually a pic of Charlie Manson.  So many of them will not understand how bad that lie is. 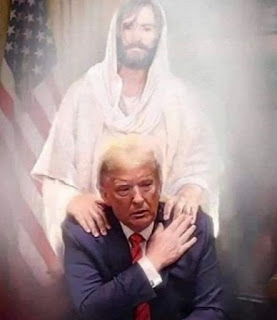