Well, here we are on a bright, cool Sunday morning.  The temps outside are a comfy 40 (F).  They were supposed to drop into the mid 30s last night, I don't think they got that low.  No frost hiding in the shadows.

My neighbor and her daughter were down yesterday.  I thought Amy lived in NY, actually she and her family live in the Poconos.  They both gave me hugs, possibly because not once did I call the police Mike.  As Amy said, her father was a seriously ill, Bipolar Alcoholic.  The house has been sold, closing in on Wednesday.  The new owner is going to renovate and rent it out.  Karen said she thinks he might be Spanish, but in this area it's more probable that he's Indian.  The influx of Indians and Pakistanis into the area is amazing.  Who know, I might become Hindi.

The patch is coming along well.  The plumbers relocated the drain pipe so simply filling in the hole with a piece of drywall was not an option; there was no place to anchor the 1" x 2" behind the existing drywall, so the patch is on top.  Pictures when it's finished.

Look what's ready to be mailed out tomorrow!  Note the catchy Santa Claus Any Time stamp!  And, as an incentive to all you Blue voters out there, November 8 is my birthday!  Help make sure I get the present I will cherish for the rest of my life! 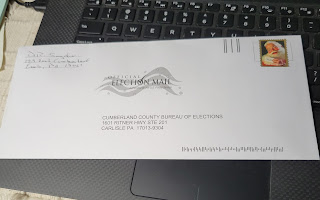 And, what about Kari Lake getting kicked out of the audience for a what was to be a pre-recorded political event.  In case none of you have realized it yet, Kari Lake wants to be the Marjorie Taylor (no longer Green), of Arizona.  She is a political stuntress, an ex-anchor who wants to be a political star.  For her, damage is something you control, never avoid.
And (#2), in a speech yesterday, Trump claimed that the January 6 insurrection was the largest crowd he ever had.  The sooner he gets indicted and they shut him up, the better America will be.  Many people are ripe with anticipation.  The DOJ has an unwritten rule that they don't do anything within 60 days of an election.  That means November 9 is open.  I wouldn't mind a birthday present that comes a day late.